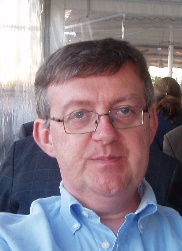 Dear distinguished ISPRM members, I became active in PRM in 1986, so more than 30 years ago. Being a member since 1988 of the International Rehabilitation Medicine Association (IRMA), the previous PRM society for individual members, I became in 1996 a board member of IRMA (ass. Secretary General), where we prepared together with the board of the International Federation of Physical and Medicine and Rehabilitation (IFPMR), the previous society for PRM societies, the merger and integration of IRMA and IFPMR. This merger was officially accomplished in Washington D.C. on 13 November, 1999, when I became a founding member and first President’s Cabinet member as the ISPRM treasurer for five years, until 2004. Ever since, I am a member of the ISPRM Assembly of delegates and of the Assembly of Individual Members (AIM). For the first time elections took place for the AIM at the ISPRM World congress in Paris in 2018 , where I was elected as chair of the Assembly of Individual Members (AIM) of ISPRM. We’ve come a long way the last 20 years, getting international recognition thanks to several ISPRM members and leaders, and thanks to the hard work of many physiatrists throughout the entire world. ICF implementation in Rehabilitation Practice, the WHO global disability action plan 2014-2021, the World report on disability, and the Convention on the Rights of Persons with Disabilities are just a few of the milestones that were realised. Nevertheless a lot of work still lies ahead of us to create improvement for the more than a billion people in the world today experiencing disability:

According to the ISPRM statutes, policies and procedures the functions of the AIM are:

At the ISPRM World congress in Kobe last June, 2019 the following plan of action was approved: Within ISPRM we need to further improve the cooperation and interaction between individual members and societies, to improve cooperation between working groups, committees and task forces, to attract even more individual members and national as well as regional societies, to make educational tools, materials, hand-outs, reviews, guidelines and others more readily available to our members, both individuals and societies. ISPRM as a society bringing together national, local and regional societies is very important, but we cannot forget, neglect nor minimalize the importance of our individual members, not only the active, but also the honorary and emeritus members. The activity of the Assembly of Individual Members should be further increased. Taking into account the regulations in article 7 of the ISPRM statutes and chapter IV of the ISPRM Policies and Procedures, the AIM membership and chair should contribute to the well-being of our society, to cooperate with and stimulate positively the Assembly of delegates, the Executive Committee and the President’s Cabinet, in order to communicate and discuss the concerns, proposals and contributions of the individual members, of which some are:

In order to accomplish our goals and execute our plan of action, we need your cooperation and contributions, the input of all ISPRM members. Together we will make our Society even stronger. Looking forward to meet you all soon at the coming World Congress in Orlando! Sincerely yours, Mark A. Lissens, M.D., Ph.D.